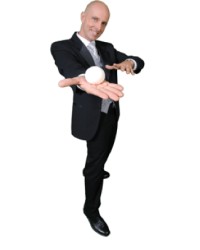 Bob Cates is a Canadian Juggling Champion, clean comedian and physical variety artist that has been delighting audiences for over 22 years. He keeps the crowd laughing with fast paced comedy routines involving advanced juggling, wild unicycling and balancing skills, magic, video game/dance, black light, laser manipulation, cigar box manipulation and an insane 21 real plate spinning finale that has to be seen to be believed. He is one of few entertainers left in North America performing authentic plate spinning – his signature piece. Bob has been nominated for “Best Variety Act” at the 2014 Canadian Comedy Awards. He was also twice nominated “Best One Man Show” at the Canadian Comedy Awards and Entertainer of the Year 4 times at the Canadian Event Industry Awards. The Comedy in Motion show has headlined on hundreds of cruise ships and at many special events and youth conventions. Don’t miss this show!